Wednesday  Sept. 13 Miami stopped the distribution of free bottles of water. The city supply of water was fine. Next day Broward declared the County water supplies safe for human consumption. The “boil your water” order was revoked.

And how about water penetration at Aquarius? Several apartments in the South Tower got some water invasion. Aquarius Condominium Association has a disaster recovery on site working on those units that had some water. In the North Tower the problem was on the West side of the hallways. My unit is in the line 5. Since Friday I have air moving machines working to avoid mold and mildew in the carpet on North Tower floor 10. In many cases to perform a better drying job the baseboard must be removed – in the hallways and inside the apartments.

About 99% of the Residents affected have been eager to have the humidity and water accumulation problem solved in their units and hallways. About 99% are very patient and very collaborative.

The usual residents that resist do what they usually do: they resist. So good that they are so few among us.

One big problem is that some units have not filed their keys with the Aquarius Management Office. Some (very few) refuse admit the professionals hired to dry up the units and common areas. This is not only a transgression of our Condo R&R but is also disrespect to Florida Law. In addition, water accumulated may contaminate common areas and adjacent units. Not good. Legal measures are under study to prevent this in the future. 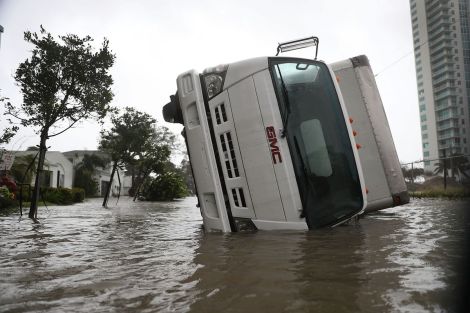 Aquarius did not have a major problem with power supply. Up today (Sept. 16) the power is not available on the precious and neglected West Parking Lot. The gates must remain open. FPL should remediate the situation pronto – so they say.

The lack of power on the West Park Lot brought trouble to ATT and Comcast services. For several days the land line telephones, TV and Internet were not working.

Many residents were able to get TV broadcast from the Air. What did they do? They improvised a digital antenna with a paper clip. More than 30 channels available, but no Digital Video Recording, no Netflix, no…    …well you get my drift.

Thursday, around noon, Comcast services were available again. Now everyone can pay their bills, consult their favorite sites and send emails.

During the after storm period even mobile phone service was a bit iffy. People used to get 3 or 4 bars were getting 1 or 2 bars from the satellite antennas of the major carriers. Did you know that you can use your phone as an hot spot? You can connect your computer or tablet and have the telephone serving as temporary router. Data charges, of course, apply.

The West Deck Pool is our next priority. Next week it should be available. The furniture is already in place. The canopy will take a while because all region is asking to have their canopies back in place. Canopy specialists are in high demand. 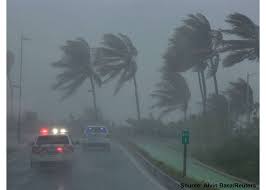 In the North Building the Air Conditioning cooling tower is running with 50% of the its capacity.  In the South Building the damage was of only 25%. What went wrong?  The “heat exchange sheets” were broken by the storm. This plastic sheets make the water cool off and refrigerate the Air Conditioning units. For this reason hallways will have not Air Cond. for some time. The replacement parts may take 6 to 12 units to arrive.

Machin Mechanical Services & Controls – MMSC has a team working at Aquarius since Monday Sept. 11. As of late Thursday we had a report that 30 units in the South Tower had no satisfactory Air Cond. In the North Tower about 15 units had problematic AC.  When Rolando Clavijo, MMSC Service Manager and his team left late Friday the number of units with Air Conditioning  difficulties was about 10. They are scheduled to be back Monday to solve remaining issues.

About 50% of the “Heat Exchange Surface” sheets were lost in the North Tower. In the South Tower about 25% were lost. To get a replacement of these cooling elements may take a while.

Two problems with the Air Conditioning that no MMSC, of VMech of the Aquarius C. Association can help with:  (1) A/C Units with lack of maintenance – some problematic units had been serviced 12 years ago and not after that time. The recommended schedule is 1 year of revision and adjustments. (2) No key no service. The A/C units should be tested, rebooted and tested again. If the technicians have no access to the units they can not do their job.

Traffic signs: In the entire region the traffic signage suffered a lot. Little by little traffic lights are back. The vertical signs downed by the storm will have to wait. Too many were knocked off.

The amount of sand that the storm “repositioned” is impressive.  The work to put things as they were before the Irma Hurricane is herculean. But this job is progressing at a fast pace.

And how about the beach?  Las Wednesday Emilio and Eldine were found by me near noon at the new Aquarius Beach Access. They were very tired but very enthusiastic. They had worked all morning to remove about 3 feet of sand from the new door. So the Aquarius Beach access was restored just a couple of days after the storm.

Hollywood Beach, the Broadwalk and nearby areas being cleaned in a frenetic pace. Yesterday it was possible that is was almost normal (if you don’t look to the downed tree branches all over). The low wall that separates the Broadwalk from the sandy beach could be seen again. Most sand removed. The beach had many goers. Most restaurants and bars back to normal. The Margaretville Theater with a live band performing and couples dancing to the music.

Dania Beach is not so lucky. Sunday morning and it is still closed.

Peter Perrone our Aqua Bistro Chef was ready to reopen the Restaurant even with just a skeleton crew. The Restaurant reopen with a limited menu. Now things are going back to normal.

This post can not be closed without metioning the exceptional work of our Staff. Joe Paez ahd his Security Team with individual like Diana and Thomas among other spent some nights at Aquarius at the expense of their own homes and their own families. The Management Office personnel: Adrian P. the property manager, Sarahi and Pat worked with all dilligente to minimize the IRMA Storm problems. And it is impossible to forget the effort of Ruslan, Emilio and Eldine always ready to help, to repair, to make things good again.

Our A/P Regional Manager Sean Fontana remained in the property during the entire period of the storm. Sean made the decision to hire the Air Conditioning repair firm  MMSC as well as the water damage firm WRG that started the repairs immediately at the end of the storm. Prompt action avoiding further damage, inconvenience and added cost.

We are so lucky to have such a team of individuals with us at Aquarius. They go above and beyond their duty to assist our elders, to make house call to verify the well being of all and to support the building.

Thank you guys. I am not shy to call all of you my friends.