The renewal of the elevators of Aquarius project was funded in December of 2016 with the approval of a Special Assessment and a Loan from Popular Bank (also known as Popular Banking Association). 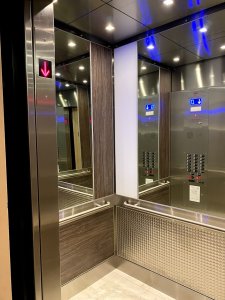 The 15 million Special Assessment (2017 SA) reserved one million dollars for the renewal of the 7 elevators of Aquarius.

In November of 2017  the  RFP (Request for Proposal), received proposal from four elevators firms. The range of proposals was from 1.4 million to 2.45 million dollars. The winning bid was awarded to Premier Elevators of Georgia, which was the lowest bid, under the advice of the Special Consultant hired to oversee the renovation project.

Time-wise we also had very long delays. Each elevator was supposed to take 15 weeks. Both Aquarius Towers were supposed to be worked simultaneously. So, the overall time should have been 45 weeks. To this we should add another 15 weeks for the Gym and West Deck elevator.

In the most conservative estimate, the project should have been completed by December 0f 2018.

A good project management strives to complete the work on time and under budget. This did not happen in the Aquarius elevator renewal.

Notwithstanding the budget overrun and these issues, we still struggle with several miscellaneous items.

What is still needing attention?

Information Technology, Management, Project Management and Public Administration are areas I am familiar with. I am also interested in photography, wine, sailing, politics, economics, and economic development.
View all posts by Cecilio Augusto Berndsen →
This entry was posted in Construction & 40 Year Inspection and tagged 2019, 40 year, 40 year recertification, budget, cabs, elevators. Bookmark the permalink.