The President of the Board of Directors of Aquarius approved a new design of the Aquarius stairs to the beach. These stairs allow access to sea-shore from the East Deck. Residents using the East Deck Swimming Pool can go directly to the beach as it was done in the past.

The new stairs are needed because the cost to rebuild the old stairs would, probably, be higher given the great amount of repairs needed. Besides the old stairs do not met the Construction Code. The steps are too short and to high and the top landing is very small.

Previously another design was considered  (The link will open in another tab).  In October of 2017 this blog published the artistic rendition of this previous concept. It had 5 landings and it was very similar to what is now under progress. Two factors determined the change. The estimated cost was near $60000.00 and it was a long set of steps.

The new design has just 3 landings and has an estimated cost of under $40,000.00. It is not easy to understand why it took so long to finalize this East Deck detail. Cost was one factor but also technical aspects may have come into play.  The final details of the project are still under study. The City of Hollywood construction permit has not be applied for yet.  Hillman Engineering,  our engineering firm of record,  is working on it. Aquarius has been promised the final plans and permit application to be done in a few weeks. This post is of December of 2018.

Let’s hope for a quick resolution. Check out the new design bellow and compare with the previous one of October 2017.

View from the ground 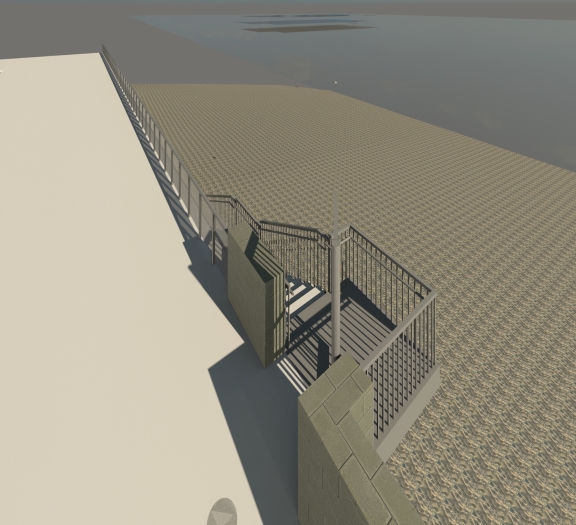 We already can see some results of legal marijuana in Canada