South Florida’s worst weather extremes  or You can expect anything

The heart of the hurricane season, from mid-August through October, produces some of South Florida’s most-intense weather.

So while we brace for storms to start popping up in the Atlantic, here’s a look at some of the region’s worst weather events:

Grounded freighter:  The Firat, a Turkish freighter, was washed aground near Las Olas Boulevard in Fort Lauderdale during Tropical Storm Gordon.
While Hurricane Andrew was the most-intense system to strike mainland South Florida, the most deadly storm by far was the Lake Okeechobee Hurricane in September 1928. After striking near West Palm Beach with 150-mph winds, it angled toward Lake Okeechobee, triggered massive flooding and claimed more than 2,500 victims.

Tropical Storm Gordon initially hit southwest Florida in November 1994 and then roughed up South Florida with 50-mph winds and heavy rains. It toppled trees, left widespread flooding and spawned a tornado that damaged 39 homes in Lake Worth. Its winds also pushed the Firat, a 506-foot Turkish cargo ship, to shore a half-mile south of Las Olas Boulevard, damaging coral reefs along the way.

In April 1925, a tornado packing winds of about 200 mph touched down near Hialeah, destroyed the state’s largest dairy farm west of Miami, demolished 50 homes and killed five people. It remains the deadliest and most-intense tornado on record to strike South Florida.

Astonishingly strong spring storms roared across South Florida on April 24 and 25 in 1979, leaving the region submerged. Water rose to 5 feet or higher in roadways, stalling hundreds of cars. Canals overflowed and crop damage was estimated at more than $30 million. The flooding immediately brought an end to the moderate drought conditions that had developed at the time.

On Jan. 10, 2014, Boynton Beach was deluged with 22.2 inches of rain in less than 24 hours, a meteorological event the National Weather Service said happens every 1,000 years. That conclusion was based on statistical data, considering rain records weren’t kept a thousand years ago.

At Christmastime in 1989, a record-breaking cold snap dropped temperatures to 29 degrees and wind chill readings to about zero. Thousands were left without power, crops were damaged to the tune of $5.1 billion and three people died in Broward County.

Light flurries floated down over palms and swimming pools on Jan. 19, 1977, the only time in South Florida history that snow was recorded. Residents from West Palm Beach to Homestead ran outside to feel flakes on their face. Cars pulled to the side of the road and teachers allowed children to break out of classes. Extremely cold air combined with a low-pressure system in the upper levels of the atmosphere produced the snow, which evaporated as soon as it hit the ground.

On Oct. 5, 2005, lightning killed a 15-year-old boy and injured 13 others during a junior varsity football game at Monarch High School in Coconut Creek. Witnesses said the brief thunderstorm that produced two bolts of lightning during the game seemed to come out of nowhere. 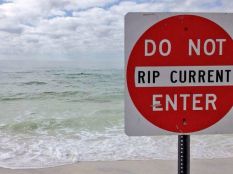 During the first three weeks of June 1998, an unrelenting heat wave left three dead in South Florida. Temperatures hovered between 95 and 97 degrees and “feels-like” readings climbed to 105 degrees.

This entry was posted in News from Around and Beyond and tagged Florida, hurricane, rain storm, rip currents, snow, south Florida, tornado, tropical storm. Bookmark the permalink.