Live and Become March 24 at Aquarius 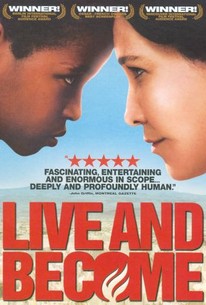 Cultural confusion and the lack of true identity plague a young boy swept away from his mother during a joint American-Israeli rescue mission in director Radu Mihaileanu’s fact-based drama. … …Shaken to the core by the radically different culture of Israel, Schlomo does his best to adapt to his new surroundings as his presumed salvation slowly gives way to the inner decay of a fading identity. Rotten Tomatoes

“Fundamental issues of ethnic and religious identity and the agony of exile are at the heart of Live and Become.”  Stephen Holden  New York Times, Top Critic

“Both a love story and inspirational tale of an individual finding peace with himself in a hostile environment.”     Jack Mathews  New York Daily News,  Top Critic

Information Technology, Management, Project Management and Public Administration are areas I am familiar with. I am also interested in photography, wine, sailing, politics, economics, and economic development.
View all posts by Cecilio Augusto Berndsen →
This entry was posted in Amenities, Pictures, Social and tagged 2017, movie night, movies. Bookmark the permalink.